The following are valid samples of insurance cards for insured persons or persons registered on an auxiliary basis. As the cards are not issued on demand, there is a paper certificate for each card which fully replaces the card and guarantees the same entitlement to health services as if the person had presented a plastic card.

Since 1 January 2006, the blue plastic card of an insured person of the VZP CR, which is also the European Health Insurance Card (EHIC), has been used as proof for all insured persons of the VZP CR who are entitled to the issuance of the EHIC. Under European law, this card is also issued to foreigners from EU Member States if the conditions are met. The maximum validity of the card is 10 years.

Specimen of the card of an insured person of the VZP CR, citizen of a non-EU country, working in the Czech Republic

According to the law, citizens of countries that are not members of the EU, EEA, Switzerland or the United Kingdom become participants in Czech public health insurance in some cases. For example, if you are a foreigner from a non-EU country who is insured for health insurance because of employment in the Czech Republic. These insured persons from so-called third countries are not entitled to a European Health Insurance Card. As insured persons of the VZP CR, they are issued a plastic card with a similar arrangement of data as the EHIC, but of a different colour – green, valid only in the Czech Republic, for a maximum of one year. These insured persons are entitled to receive full healthcare here, just like our other insured persons. 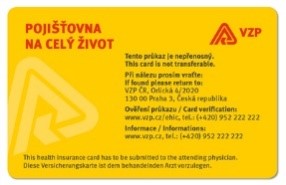 These are the cards used by a foreign insured person who is registered with the VZP CR on an auxiliary basis for the purpose of receiving healthcare in the Czech Republic. They are valid only in the Czech Republic. They always state the extent of healthcare covered by the health insurance company. There are two types of yellow cards. In addition to these yellow cards, the existing paper Registration Certificates also remain valid. 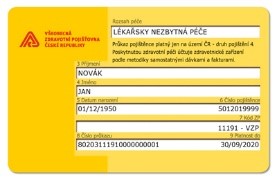 Similar to the TP – E card, which is issued to insured persons from Contracting States (Northern Macedonia, Serbia, Montenegro, Turkey, Albania, Tunisia) when they perform auxiliary registration with VZP CR. They are not covered by European Regulations and are therefore only entitled to necessary and urgent medical care in the Czech Republic at the expense of their foreign insurance company, which is paid for on an auxiliary basis by VZP CR.